The racquet is the most important sports equipment used in many racquet games. Although each racquet has many design specific for a certain racquet game, more or less they have the same origins but evolved to the form that we now see today. Racquets for tennis, squash, badminton, and even racquetball all have evolved countless times along with many designs and improvements.  We now look at the history of the racquet specifically the squash racquet.

History of the Squash Racquet 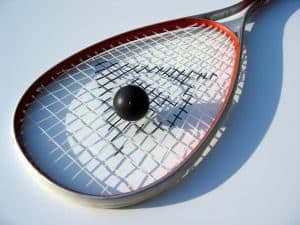 As what history dictates, the direct predecessor of the game of squash is the game tennis which was first played by many French monks between the eleventh and twelfth century. The racquets then were made out of human flesh! This wasn’t meant to be a gore statement but rather as a truth. The very first form of squash uses the player’s hand as a form of a racquet. Players hit a ball by hitting it against a certain wall.  Later on, this was changed to hitting over a simple net. Although not brutal, when a player hits the ball for some time, the hands become too uncomfortable. The players then started wearing gloves. Later on they added a form of webbing between the fingers but later on, began using light and solid paddle made of wood.

By the start of the 14th century; players of the game were already starting to use what we can already call a racquet. Because they were using a wooden frame which has strings bound that are made of gut. Italians were the ones credited in the making of this invention. By the start of 1500, racquets have become popular sports equipment. Squash racquets at this time can be described as having a long handle along with an oval-shaped head. Because of its oval-shaped head; the racquets at this time would closely look like the modern version. Even the game itself was already like the squash as we know today. They usually are played indoors where they hit a ball using the racquets. However, unlike squash today, the ball was hit across a net instead of hitting it against the wall.

Major Walter C. Wingfield provided a modification of the racquet. He registered a patent for new equipment as well as the rules of a game similar to the outdoor lawn tennis in London in the year 1874. The game he registered was considered by many as the first version of lawn tennis. After the registration, the equipment that he introduced became popular and was even recommended for use in many countries in Canada, Russia, India, and China.

The racquet differs slightly because this has a larger head compared to the previous designs. Instead of the oval-shaped, the racquet this time has a round head widened and flattened as it approaches the top. These racquets were the basis of the modern tennis racquet.

The rise of the Metal Frames

Racquet manufactured with a metal head already existed as early as the year 1889, but this never become popular compared to other racquet designs. The use of wood in making the head was not changed until 1967. This was the time when Wilson Sporting Goods produced a popular metal racquet, called the T2000. Because it was stronger and lighter compared to the wooden racquet, it suddenly became a top-selling racquet. Jimmy Connors became famous by using the T2000, often seen playing at many professional tennis games during the 1970′s. He put to good use the racquet which has long throat and steel frame.

In the year 1976, Howard Head introduced an oversized racquet while working in the Prince Company. This racquet design also gained widespread popularity often called the Prince Classic. Weed USA claimed that they made and released oversized racquet in the year 1975. The Weed racquets though never became top sellers compared to the Prince Classic and the more expensive version called the Prince Pro. Both racquets used aluminum frames with a string area which is 50 percent larger than the 65 square inch string area of the wood racquet.

The aluminum racquets which were very lightweight greatly increased the power of these racquets. This made the game of tennis popular even to the beginners. However, this posed several disadvantages to advanced and powerful tennis players. The flexibility of the frame along with the power caused the shots to become very unpredictable. Power was there but there was no control especially when hitting powerful off-center shots. When this happens the frame gets distorted, string of the racket changing direction as well. This often causes the ball to hit a direction which was not the original and intended direction.

Advanced players looked for a harder frame material. This was solved by combing carbon fibers and using plastic resin to bind them. This new material was called graphite even though this doesn’t have the same properties as the real graphite used in pencils. Racquets were modified again using graphite as the frame. By the end of the 1980s, racquets were classified according to the materials used; affordable racquets that were made with aluminum frame and the more expensive racquets with graphite construction. Wooden racquets eventually became phased out except of course for its antique and collector’s item value.

Racquet at the Peak of its Development

The two most important properties of a racquet are stiffness and lightweight. Graphite has become the most common choice for strong racquets however the technology in adding stiffness to the racquet without adding additional weight has yet to improve. Many will say that the most famous of the new graphite racquets were the racquet called Dunlop Max 200G. This racquet was used by both Steffi Graf and John McEnroe. In 1980, this racquet weighs about 12.5 ounces. 20 years from that one, the average weights for racquets have been greatly lowered to around only 10.5 ounces; even some racquets today weigh as light as an outstanding 7 ounces. New materials have been added to greatly reduce weight and this includes fiberglass, titanium, Twaron, ceramics, boron and even Kevlar. These materials, however, are still mixed with graphite to produce desired effects.

In the year 1987, Wilson solved the problem on the stiffness without looking for new material. Instead, he came up with an idea and introduced a thicker frame which was then called the “widebody”. It still remains a mystery why many didn’t think that to solve the stiffness problem; you just increase the width of the racket frame that will resist the impact of the ball. Using this idea, Wilson produced racquets but this were big racquets because the frame measured 39 mm wide making its width more than twice the original wooden racquet’s width.

Near the end of the year 1990s, the popularity of the “widebody” greatly decreased, however, the “widebody” concept was to remain in the subsequent racquet models produced and later on became a standard in the racquet production. Although not as wide as Wilson intended, racquets of today are wider compared to the original wooden frame racquets.

The squash racquet making companies though didn’t make much money anymore because of the innovations that they introduced. Graphite rackets are very durable and can last for many years without replacement. Unlike the wooden predecessor which later on cracked and loses its effectiveness after several years. This means that when buying a graphite racket; the owner need not buy a new one because of its durability even lasting for several years. The racquet making companies have to continually introduce various innovations including reduced weight, wider frames, and even oversized weight. New materials combined with graphite were marketed to produce new effects such as more control in the spin and direction of the ball.

With these advancements in the technology, the squash racquet has long improved starting from its original predecessors. With continuous research to improve the quality and the durability of the squash racket, it would surely make it far from what it was originally intended for.

In the years to come, we can expect new technologies to be discovered and incorporated in the racquets of today. Time can only tell how much will the racquet improve and what technologies were included and involved in the future squash racquets. You just can help but be amazed at the single equipment improvement over the years.

Want to know more about squash history? We have a wonderful article on Squash – A Glimpse of its Colorful History